Pallet transfer conveyors are used to move heavy loads to the shipping area. Both the pallets and the conveyor pose risks for accident and injury and must be safeguarded. Read on to learn how SX5-B safety laser scanners allow a continuous flow of pallets through the system while effectively safeguarding the loading and unloading stations on the conveyor. 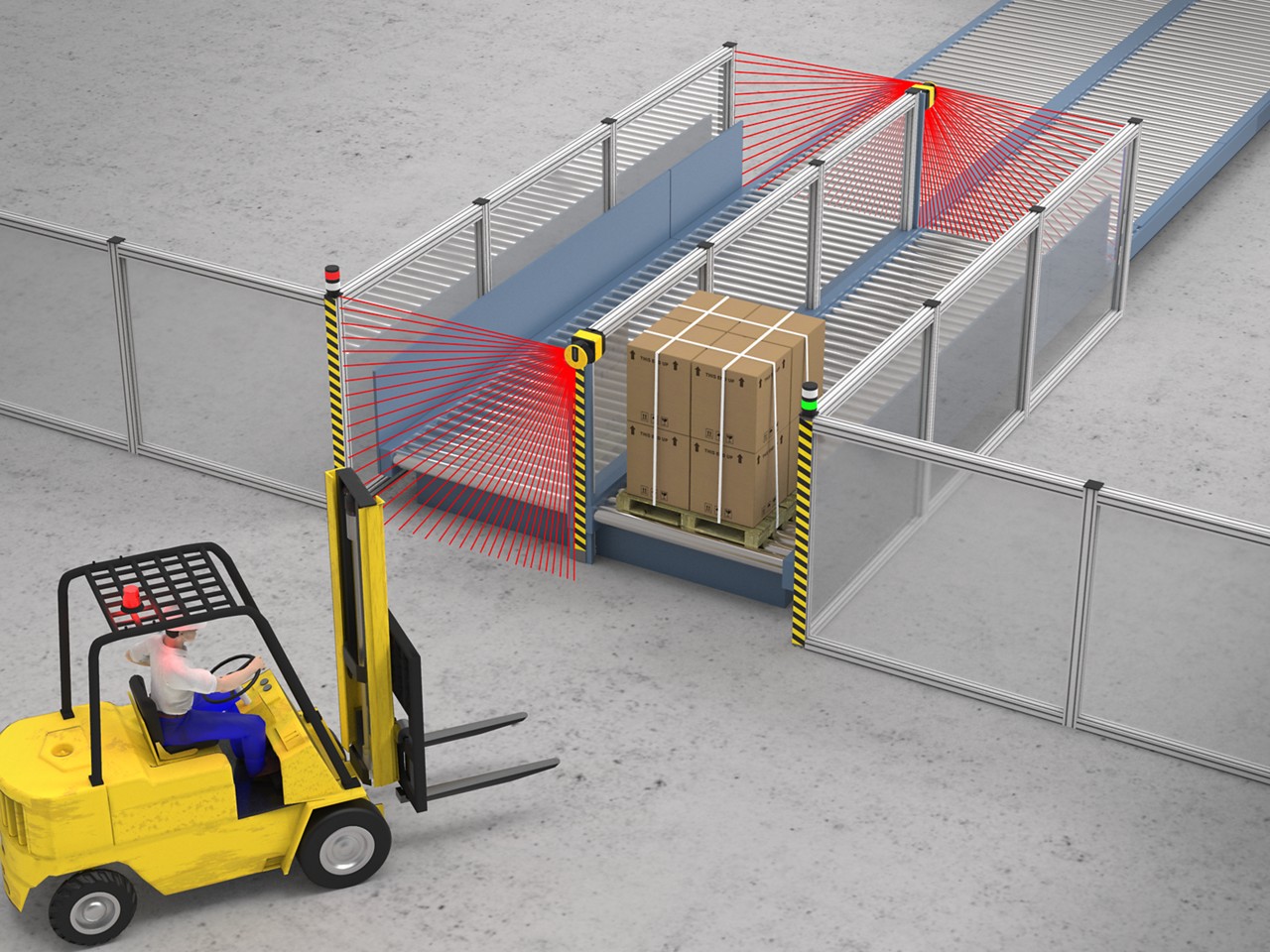 Protecting Personnel from Heavy Pallet Loads on a Conveyor

Pallet transfer conveyors are essential to moving heavy loads from work areas throughout a facility and to the shipping area where they are picked up by forklifts. The weight, size, and motion of a pallet as it travels on the conveyor as well as the movement of the conveyor are all potential hazards to staff.

To help mitigate these dangers, hard guarding is installed along the sides and between the lanes of the conveyor. However, the loading and unloading stations must remain free of barriers to ensure that the pallets move smoothly through the system. Deployed at the loading and unloading stations, SX5-B safety laser scanners are an easy-to-deploy solution for safeguarding access points without disrupting the flow of pallets.

Enabling a Continuous Flow of Pallets While Protecting Access Points

An SX5-B safety laser scanner is deployed at the loading station and a second SX5-B at the unloading station. To reduce the risk of damage caused by impact, each safety laser scanner is installed at the top of the center fence, above the pallets and forklifts. From this position each SX5-B scans a 180° area across the four access points, out to the reference points on the edges of the hard guarding and down on the floor. A person or object attempting to breach this protected area will be detected by an SX5-B, which will trigger the conveyor to come to a controlled stop.

SX5-B safety laser scanners utilize an intuitive configuration software which features menu-driven tools that make device setup quick and easy. Users can configure the device for multiple zone sets which can be switched based on input signals. By creating a left safety zone, a right safety zone, and a left-and-right safety zone, a single device can effectively safeguard two separate access points.

To allow a free flow of pallets through the system, switching sensors are directly connected to the area switch inputs on the SX5-B at each station. A pallet approaching the loading or unloading station from either the left or right lane will be detected by the sensors. This triggers the SX5-B to change zone sets, shifting the protection zone coverage to allow the pallet to pass through. Once the pallet has cleared the area and can no longer be detected by the switching sensor, the zone set will switch again, restoring safety coverage to both sides of the conveyor.

The SX5-B has a compact, one-piece design that installs easily in any location without requiring time-consuming alterations to area infrastructure. It can be setup a few simple steps using Banner’s free configuration software. This robust software features menu-driven tools that guide users through setup and make it easy to design custom protection zones to meet the needs of any application.

Zone Set Switchover: The SX5-B can be configured for up to six zone sets. Each zone set consists of user -defined protection zones that can be switched in response to input signals. This allows the SX5-B to safeguard two areas and then switch zone sets to temporarily allow access to an area while safeguarding the other.

Dynamic Muting: Muting sensors can be directly connected to the SX5-B, eliminating the expense and hassle of adding an external module or controller to enable muting. The SX5-B will create a tightly protected area with minimal dead zones surrounding the muted object while the muting function is active.